Abstract The behavior of soil appropriate to earthquake and maritime problems may studied by performing alternating cyclic simple shear and triaxial tests. The main purpose of this present research is to evaluate the strength reduction of saturated untrained clay soils under direct shear cyclic stress. The test results revealed that such reduction exists and it increased with increasing cyclic stress amplitude, confining pressure, the number of loading cycles and with decreasing sample thickness. The results indicate that there is a lower limit to the cyclic stress ratio below which cyclic loading has a negligible effect on clay softening. It is observed also that the direct cyclic strength is greater than the triaxial cyclic strength which conforms to the published results.

INTRODUCTION In the last five decays much interest has developed in the behavior of soils under cyclic loading conditions. In the fields of earthquake and ocean engineering. This has been generated by the occurrence of a number of major earthquakes in Nigata, Japan and in Alaska in 1964 and by the discovery of large amounts of oil beneath the North Sea leading to the design of structures to withstand wave action. In both of these cases the stresses develop on elements of soil in the ground, whether they be due to wave forces on an ocean bottom gravity structure or to motion resulting from ground shaking in underlying rock formations, are cyclic in nature and it becomes necessary to determine the manner in which the soil will respond to this particular type of stress condition.

Kramer (1996) concluded that earthquakes of Haicheng (1975), Tangshan (1976), Northridge (1994) Kocaeli (1999) and ChiChi (1999) evolved with a new study of failure of cohesive soils as reported by
Phule et. al. (2016). It was suggested that clay behaves quite differently. In contrast to liquefaction .cyclic mobility occurs when the static shear stress is less than the shear strength of the liquefied soil .Boulanger and Idriss (2004) presented a new criterion, based on the cyclic behavior of clays, that fine-grained soils exhibit clay-like behavior during the untrained cyclic loading imposed by the earthquakes. They proposed plasticity index (PI) greater than 7 for cyclic mobility analysis of claylike soil. Phule et. al. (2016) discussed the results of the cyclic softening potential evaluation of clayey soils. They stated that the pore water pressure produced during an earthquake reduces the effective stress of the clay thereby reducing the untrained shear strength similar to unloading. However after an earthquake, the pore pressure dissipates and the soil strength increases due consolidation. They added that this phenomenon of temporary strength loss in soft soils during an earthquake is termed as a (cyclic softening). The author believes that when saturated clay is subject to untrained cyclic

loading, the residual pore water pressure remaining after one cycle will be superimposed on the next, and each cycle will produced an accumulative increase in pore water pressure accompanied by a decrease in effective stress. The effect of this is to soften the clay and reduce the untrained strength. Sun (2018) studied the effect of variable confining pressure on cyclic triaxial behavior of soft marine clay, He concluded that these behaviors are significantly affected by both of the variable confining pressure (VCP) and cyclic deviator stress ratios (CSR). For a given value of VCP, both of the pore pressure and permanent axial strain are consistently increase with the increasing values of CSR.

During an earthquake, the underlying soils are subjected to horizontal acceleration as high as 0.2 – 0.6 g (Seed, 1979). These pulsations and the associated vibrations that they may induce in structures will cause an increase the tendency for shear deformations to occur. The study of earthquake problems involves four major aspects (Khaffaf 1978): 1. Earthquake frequencies range from ½ – 10 Hz. 2. Period of intense disturbance may be less than a minute. 3. Maximum earthquake activity man not proceeded by lesser disturbances. 4. In an earthquake, vibration is propagated from the underlying rock masses through the foundation soils to the structure.

THE TEST PROGRAMME The behavior of soils appropriate to earthquake and maritime problems may be studied by performing alternating cyclic loading tests. Many research centers have employed different methods of reproducing the field conditions. The majorities of investigations have involved
development of either the simple shear or triaxial apparatus and examine the applied boundary parameters.

In this paper, reversed cyclic loading tests were performed by subjecting the samples to a constant cell pressure, and by applying alternating shear forces under untrained conditions. All tests performed at a frequency of 1/5 Hz, using an approximately square load shape.

A comparison between the results of the cyclic direct tests with those from the triaxial cyclic loading tests have been made by Peacock and Seed (1968), Theirs and Seed (1969) , Finn et al. (1971) and Sun (2018). However these comparisons were made by using different materials, sample preparation techniques and test parameters. Therefore there is a need to do such comparisons by using the same materials, sample preparation techniques and test parameters; and accordingly an attempt was made to compare the present direct cyclic shear results with those from triaxial cyclic loading results

Figure 1 shows the maximum and minimum shear strains (Ȣmax. and Ȣmim.) versus number of cycles at different τ /Cu ratio, where Ƭ is the cyclic stress and Cu is
the static strength as a typical results. Previous researchers have used the parameters τ /Cu to define general limits of performance of clays tested under cyclic loading. Their efforts have been directed at determining the relationship between the applied cyclic stress, and the number of cycles to failure. In most cases τ /Cu was considered to be independent of other parameter for particular clay 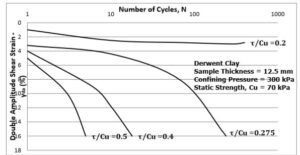 Figure 1: Maximum and Minimum Shear Strain (%) Versus Number of Cycles at Different τ/Cu

Generally it can be seen from Figure 1 that the larger the cyclic shear stress ratio, the lower is the number of cycles required to cause a specified strain. This finding is qualitatively in agreement with Thiers and Seed (1968), Anderson (1976) and Khaffaf (1978). But the author thinks that the difference in absolute quantities data is dependent on several factors such as type of cyclic apparatus, frequency and type of soil.

Also it can be seen from Figure 1 that the strain behavior of most of samples tested is unsymmetrical about the zero strain position, and this may be due either an unsymmetrical loading applied to the
sample during the test or to a natural tendency of a sample to yield more in the direction of the first half cycle of loading.

Figure 1 suggests a limit of cyclic stress ratio, τ /Cu = 0.2 below which the soil can withstand an infinite number of cycles. This is also clear in Figure 2. This finding is agreed with Phule et. al. (2016) who reported that the pore pressure dissipate after the earthquake and the soil strength increases due consolidation. The author, however can suggest that there is a limitation to Phule et. al conclusion, for example Figures 1 and 2 show that the present results agreed with Phule et. al conclusions only when τ /Cu > 0.275

It can be seen also from Figure 2 that under a stress ratio, τ /Cu = 0.5, 0.4 and 0.275 suffered significant shear strains increases from the first cycles. Finally exceeding 15% at 5, 18 and 220 cycles respectively. While for samples tested at low cyclic level of 0.2, only a small double amplitude shear strain, Ȣda =2.8 % had developed after 300 cycles and thereafter began to decrease in amplitude. The author thinks that the reason of this may be due to
pore water pressure dissipation from the critical softened zone during cyclic loading. It can be concluded that the mode of deformation in the present direct shear apparatus is somewhere between the uniform simple shear and the single shear plane*modes, and the sample especially the very thin ones , are affected by platen boundary conditions possibly induced by the ribs found in the platen as shown Figure 3.

Figure 3: The Mode of De-formation of the Present Direct Shear Apparatus 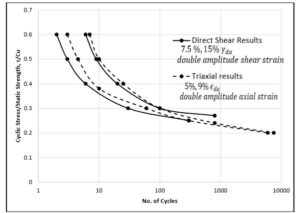 Figure 4: Comparison of the Cyclic Direct Shear and Trixial Loading Strengths on the Basison the Equivalent Strains.

Figure 4 is re-plotted in Figure 5 which is a plot of the difference between the number of cycles required to obtain an equivalent failure criterion in both
apparatuses, expressed as a percentage of their mean values , versus the cyclic ratio, τ/Cu.
The author has obtained the ultimate failure criterion by direct extrapolation of the triaxial data to compare them with the present results.

It can be seen in Figure 5 that this difference is most significant at low cyclic stress ratios and double amplitude strains. The author believe that there is no physical reason why the behaviors should be the same, indeed, contrary to observation intuitively, it might be expected that the more server triaxial mode should require less cycles.

CONCLUSION The main findings obtained from this research are listed below: a) The larger the cyclic stress ratio, the lower is the number of cycles required to induce a prescribed deformation or softening. Lower limits of cyclic stress ratio are observed, below which the cyclic loading has a negligible effect on clay behavior in terms of any increase in double amplitude shear strain, Ȣda with the number of cycles. b) There is some evidence that direct cyclic strength increases with increasing confining pressure; however this may be attributed to lake of full saturation and compared with thickness effects it is of secondary importance. c) The thicker the sample, the greater is the number of cycles required to induce a prescribed strain. d) The direct cyclic strength is lower than that in the cyclic triaxial apparatus when both tests are analyzed with respect to the static triaxial untrained strength. e) The difference between the cyclic triaxial and direct shear behavior is most significant at low cyclic stress ratios and double amplitude strains (which implies a great number of low strain cycles). f) The direct cyclic data are reanalysis with respect to the static untrained
shear strength mobilized in the direct shear apparatus. It is observed that the direct cyclic strength is now greater than the triaxial cyclic strength which conforms to published data.