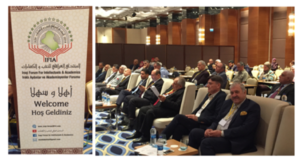 During the first day and second day sessions of the conference,  abot 40  Iraqi expert  along with academics, diplomats, former Ministers and professionals discuss on the water scarcity issues in Iraq .

The Scientific Conference organized by the Agriculture and Irrigation Committee of the Iraqi Intellectuals and Academician Forum,  took two days . The main theme of the conference was “Water Scarcity in Iraq: Reality and Future Challenges ”

Former Iraqi  ambassadors , the managers of Iraqi’s Engineering Consulting firms, the lawyers, the previous Agriculture and Irrigation Ministers of Iraq, the Iraqi representatives of international organizations dealing with water and irrigation in Iraq, Iraqi’s  academicians, former diplomats,water and energy experts  were  participated to the conference

The main  topic of the conference was “Water Scarcity in Iraq : Reality and Future Challenges”   In the conference  several papers were presented under the following indicated headings:

B-Water Quality and its impacts on water uses

C- Studies on the Future of Iraq’s water resources

Water scarcity, present and future and its effects on Agriculture production

During the conference, academicians  presented several  scientific articles  on water quality, surface and groundwater distribution  in Iraq, strategic plans to ensure national water security, efficiency of existing storage and irrigation projects, and ways to improve  them. Trans boundary waters were also discussed in the context of the 1994 UN Convention on the Law and the Helsinki Rules.

In the conference, it was also  mentioned that because of  the decreasing  amount  of  water coming from Turkey and Iran,  water level has been drooped  close to the  intake level  in the Baghdad’s drinking water storage pool,that threats the drinking water supply to the city.  Drought periods and decreased streamflow from Euphrates and Tigris has also affected the agricultural sector plays important role for employment  and increased the internal immigration from rural to urban.

A presentation on the status of water and soil resources in the Dicle and the Euphrates Basin, the location of the dams, topographical, geological structure and common projects that can be created through this data were presented using the GIS data.

In the conference ,Turkey and Iraq  joint water and land development project and investment   was proposed by an  Engineering & Consultancy Bureau. In this presentation, it was emphsized that “The geographical, topographic and climatic nature of the water resources in Turkey and the neighboring Iraqi territories,  give preference and priority to other areas adjacent to joint investment.”

Just before starting the conference,Dursun Yildiz replied some questions of the BBC Persian TV  reporter about Turkish water management policy of the  Tigris and Euphrates rivers .

On the second day of the conference, Dursun Yıldız has been invited to make a 15-minute speech . The speech was broadcasted live on Al Jazeera TV channel. Speaking about the changing security paradigms of the cold war era in the world, Yıldız said that climate change is now a national security problem that  couldnt be solved by an individual country . He said that  this requires a new hydro diplomacy vision of a more realistic, mutually beneficial interest in Transboundary Water Management.

He stated that  a new long drought period  in the region can make upside down  all the security and economic balances that has been on a very critical stage since long time ago. Turkey and Iraq can collaborate to solve the water problems by changing the paradigm from only river water sharing approach to high level economical integration in different sectors. He also indicated  that both countries have sufficient natural resources that could facilitate this cooperation.

In his speech, on water issues in the Middle East,  he stated that   results obtained from the past experiences showed that  through negotiations over the sharing of water  hasn’t been succesfull . An “Innovative ,More Realistic and Visioner Water Diplomacy “ is required”  Climatologially and Politically different New Middle East will require a new water equation and applicable solution for this equation with new water diplomacy paradigm . Any step towards the development of interdependence principle, in order to increase the relations of the countries with each other, will positively affect inter-country hydropolitics. Without mutual trust and mutual benefits between riparian states no sustainable and effective water agreement can be accomplished.

In the Tigris and Euphrates Basin , developing the mutually beneficial interrelations certainly play the most fundamental role in the solution of the older hydropolitical problems .The only solution is the development of water management cooperation based on mutually benefical approach that can be called “Real Hydropolitics”. Or more realistic hydropolitics

“32 years ago,   a visioner water peace process has been started by Turkey  with proposing “three stage plan” for Euphrates and Tigris River basin.Let alone implementation of this proposed plan , riparian state hasn’t  even made an agreement  to measure  reliable flow  data collectively that  would be  accepted by each country in  the Tigris  and the Euphrates  River Basin.

Dursun Yildiz stated  that the lost of the  mutual trust   between the countries in the Middle East has played an important role  for unintegrated project development in the region, however, the climate change does not wait for the confidence building process and  he emphasized that the region should now focus on  search for what it could be  the muttualy beneficial  projects which will shift the negotiations  from only focusing to river water sharing  to high level economic cooperation.

Health situation in Iraq before and after occupation