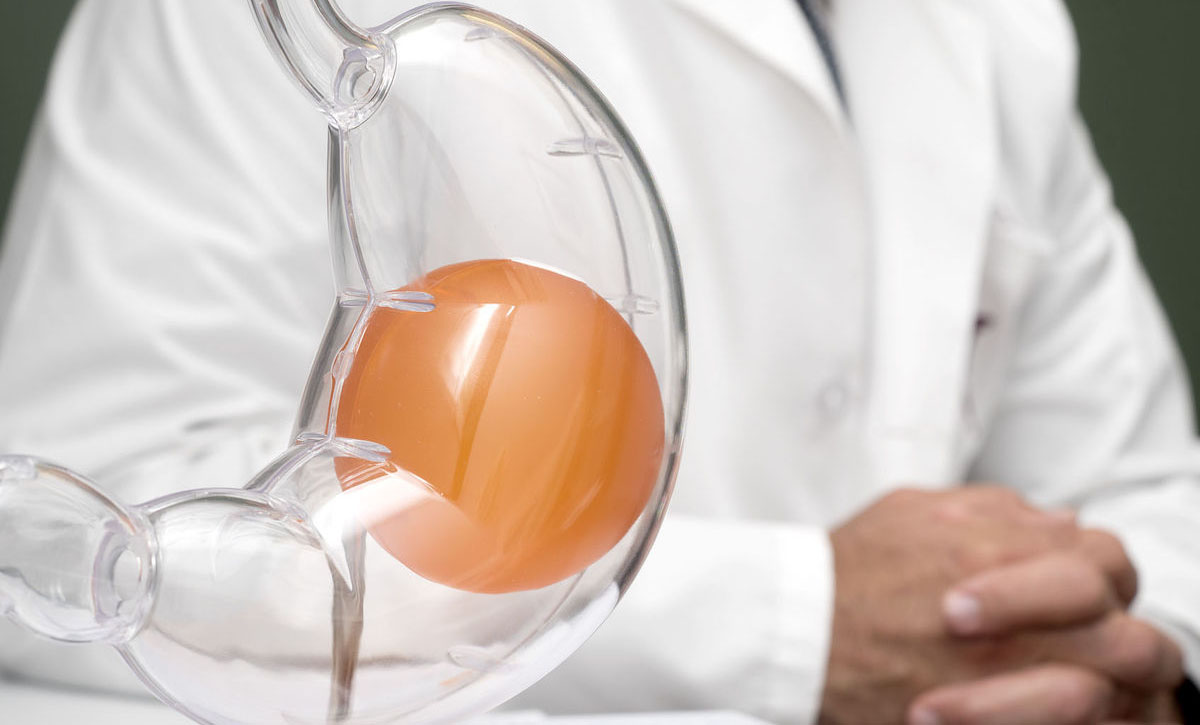 Back ground/aim: Obesity is a medical condition in which excess body fat has accumulated to an extent that it may cause adverse effect on health and regarded is one of a leading preventable cause of death worldwide. Many conservative ways have been used to decrease body weight including diet regime, physical exercise, drugs and balloon insertion into the stomach. More advanced way including surgical intervention to decrease stomach size or bypass small bowel. In this study, we share our experience with MedSil intra-gastric balloon to evaluate the safety, tolerability and efficacy for patients with class one and two obesity.     Methods: From January 2015 to January 2017, MedSil intra-gastric balloons were inserted in stomachs of 85 patients at the endoscopy unit in CMC Hospital Erbil/Kurdistan/ Iraq. All the patients had a body mass index between 30 to 39 kg/m2 and were within the age range of 17-50 with a mean age of 29 years, there were 55 female 30 male patients. After using special criteria for their selection, the patients underwent consent, pre balloon insertion investigation tests and anesthesia evaluation. The balloon was inserted via upper endoscopy device after diagnostic study and then it was filled with 550-600 mls of stained saline. All patients’ were given an analgesic and antiemetic for a week and anti-secretory proton pump inhibitors for 6 months. Diet and the importance of the exercise were part of the program phase and protocol. The balloon was removed after 6 months. The patients were followed during the 6 months of insertion and 6 months after the removal. The weight reduction and complications were documented and reported.

Results: Satisfactory weight loss obtained in 85% of patients after six months and 75% after 12 from insertion respectively.  One patient underwent early removal of  balloon after 7 days of insertion; other patient had balloon leak and shrinkage which necessitated replacement by another one.  Early post-operative pain and vomiting were universal but subsided in 90% during the first 10 days.     Conclusion: Intra gastric balloon for the treatment of obesity seem to reduce body weight under certain selection.

Obesity has reached a level of a big health problem in the world. The World Health Organization reports that worldwide, more than one billion people are overweight and at least 500 million of whom are severely obese. An estimated 115 million of these people will develop serious medical conditions, including diabetes mellitus, cardiovascular diseases, stroke, liver problems, and cancer. Studies show that those potentially life threatening conditions can be improved with weight loss. 1,2 . Effective weight management for individuals with obesity can be carried on by many ways, what with a trail of pharmacological approaches was not achieving any significant outcomes 3. Bariatric surgery has provided significant weight reduction and gained popularity, but there is a price to pay, for there could be complications in the procedure and its outcome, as well as associated major morbidities and even mortality. There is, therefore, a growing demand for less invasive approaches.

This paper, presents our experience of the safety, tolerance and weight reduction efficacy of the MedSil intra-gastric balloon in class one and two obese patients in our region.

The study included eighty five patients with class 1 and 2 obesity, there were 30 males and 45 females in the age range of 17-50 with a mean age of 29. The criteria for inclusion were as follows:

2- Failure to achieve weight control by means of lifestyle modification with or without pharmacological agents.

A- Removal not allowed without a definite indication.

B- Follow diet control and regular exercise during and after the insertion.

C- Visit the doctor according to special schedule given to the patient.

Exclusion criteria were as follows:

2- Pregnancy, or planning to get pregnant.

The first step was diagnostic esophagogastroduodenoscopy to rule out any pathology that would preclude balloon insertion. After the removal of the scope a collapsed balloon with its filling tube were inserted into the stomach. The location of the collapsed balloon was controlled near the antral region by re-inserting the scope under direct vision, the guide wire removed; the balloon was filled with 550-600 mls of saline stained with 10 mls of methylene blue). as shown in figure 1,2,3.

After the balloon had been filled, the filling tube gently detached from the balloon and taken out. The mean procedure time was 25 min. The patients were kept for 10 hours for post procedure care and discharged home. They were allowed to start with small amounts of liquid after 6 hours and to start on a soft diet the 2nd day and to eat usual food after 7 days.

Antiemetic and analgesic medication (Ondansetron and acetaminophen) injection were used in the post-operative time and then changed to oral rout for 3 to 5 days. Proton pump inhibitor (PPI) 20 mg once daily was prescribed for the whole six months.

The balloon was removed after 6 months under monitored anesthesia care with endotracheal intubation at the endoscopy unit at operative theatre. The average time for the removal of the balloon was 20 minutes; patients were discharged 4 hours after the procedure, with the advice to continue the diet and exercise protocol and to visit the doctor according to the appointment given.

Regarding weight loss assessment, we divide the patients into 3 levels, level one included those who had satisfactory results after 6 months in which they lost 25% or more from original weight and remain so after 12 months from insertion, fair result level were those who lost 15 to 24% from their original weight, unsatisfactory level included those who showed decrease of 14% or less from their original weight, the weight loss percentage has been calculated by using the following formula: kg lost divided by starting weight, then, multiply the result by 100.

On account of intolerance, that is, nausea, vomiting and abdominal cramps, one patient had the balloon removed 7 days after the initial insertion and excluded from the study. Otherwise, with 5 to7 days of antiemetic and analgesics, the procedure was generally well tolerated and the balloon remained for the scheduled period. In one patient, evidence of balloon leakage was noticed by a change in urine color after 2 months of insertion, the patient underwent removal of the damaged balloon and replacement of a new one, the follow up for her weight reduction started from the second balloon insertion time. All patients recovered uneventfully from anesthesia during insertion and removal without any major complication.

The outcome in our patients was classified into three groups. Group 1 (satisfactory result) accounted for 85%, 75% of patients whose maximum weight loss was more than 30% from their original weight after 6months and remained after 12 months from insertion respectively. Group 2 (fair result) represented 10%, and 14.5% of the patients, who had had lost between 15% to 29% from their original weight after 6, and 12 months from insertion respectively. Group 3 (unsatisfactory result) represented 5%, and 10.5% of the patients. They had been unable to achieve perfection and had lost less than 14% or less after 6 months, and 12 months respectively.  As shown in table 1

The deployment of intra-gastric balloon to promote weight loss was first reported by Nieben et al in 1982 7.  The intra-gastric balloon is becoming a popular weight loss method as alternative to surgery especially in those with class one and two obesity. Over the years, several researchers have tried different balloon devices 8 . We used MedSil (Russian) balloon which is spherical in shape with a volume capacity (500 to 600 mls) and is filled with saline. Gastric balloon procedures were approved in the United States in 2015 for patients with a BMI of 30 to 40 that have not had previous weight loss surgery, but are currently not covered by insurance. Intra-gastric balloon act by reduce the available room in stomach for food. The average stomach is 1.5 L in volume and the average gastric balloon takes up close to half of that space, physically the patient not able to eat as much in one sitting, furthermore, it restricts the free passage of food and water, essentially slowing its passage through stomach, making patient feel full quicker and longer.

Obviously, the outcome is not comparable with the results obtained in bariatric surgery, but noteworthy to said that it doesn’t require surgery, no incisions or scarring, typically calls for very little recovery time, not permanent, not invasive, no need for vitamin supplementation, patient can return to her or his work within a 10 days, it may result in long-term weight loss when used in conjunction with a diet and exercise program and lifestyle changes.

Complication of intra-gastric balloon are either simple that can be overcome by medication and time like acid reflux, nausea and vomiting which are universal during the first few days, vomiting after eating for the first few weeks is not uncommon but temporary and can be resolved if the patient adapts slow eating and select the type of food 9,10. Stomach cramps are common due to presence of foreign body in the stomach and can be managed by antispasmodic medication. Difficulty in sleeping may occur, this may be related to an uncomfortable stomach or acid reflux while lying down. Three to five days of analgesics and antiemetic’s found to be extremely helpful for early abdominal pain and vomiting. Proton pump inhibitor was extremely effective for the prevention of ulcer and balloon damage from the effect of gastric acid, follow up of patient is extremely important to overcome such conditions.

Weight loss in our patients was impressive, with the average weight loss of more than 25% of their original weight which change the patient from one class of obesity to a class below it. However, in 1-year follow-up, 10% to 15% of the lost weight had been regained which is smeller to other studies3,7

In conclusion: Our data documents that in well-selected patients the intra-gastric balloon is an effective tool that can be used to achieve weight loss with minimum complications. We believe in that patients’ motivation and compliance, as well as respect for dietary and behavioral rules are mandatory to achieve the expected results.

Figure 3. Complete inflation of the balloon