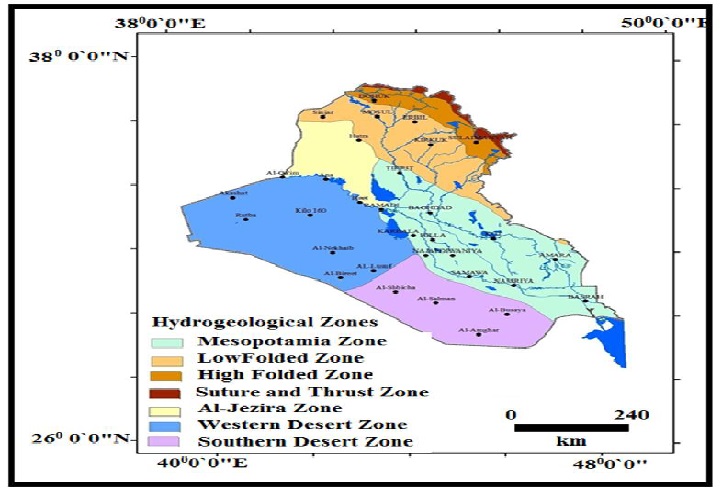 Groundwater Quality and Their Uses in Iraq

Aquifers are porous media with various physical criteria and hydraulic conditions that largely affect the quality of water they contain. When an aquifer is a sedimentary rock, its depositional environment draws along with its present recharge condition and the footprint of its groundwater quality. The geologic setting of Iraq consists of a sedimentary cover 4 – 13 km thick with a sequence of alternating pervious and impervious sedimentary rock beds of coarse clastics and fractured carbonates with fine clastics and hard rock carbonate. This succession has developed a successive multi aquifer systems. The present study has recognized the major formations that so far have been explored and sampled using available data to identify the probability of their water quality which might be obtained when drilling a well through any of the formations. From among tens of thousands of wells drilled to produce water from whatever horizons they encounter, only those wells which penetrate a single formation were considered. The results show that groundwater quality expressed as total dissolved solids in the explored 17 aquifers or aquifer systems are highly variable. Nevertheless, an indicative medium range value can be deduced for each. In principle, lower salinity values and carbonate water type associate with the unconfined aquifers that receive active contemporary recharge as in the case of the exposed aquifers in the High, and to less extend the Low Folded Zones. Even in the Stable Shelf where present recharge is limited, unconfined part of the aquifers is differentiated by their lower salinity and water type. On the other hand, a partial displacement of sea water in the marine deposit carbonates has as well occurred due to previous recharge periods. This was possible to the karstified carbonates of the Stable Shelf due to their high porosity. The finer marine deposits in the Mesopotamia Basin maintained their high groundwater salinity and marine water type. Water suitability for human drinking can be found in most of the aquifers especially aquifers in the High and Low Folded Zones. In the Stable Shelf, Al-Jazira, and even in the Mesopotamian Plain, recharge boundary conditions of the aquifer in the selected drilling spot should be carefully examined. The high variations of water quality in the aquifers in the latter zones requires an evaluation of water suitability well by well. However, most of the groundwater derived from the northern parts of the Stable Shelf and Al-Jazira Zones aquifers are suitable for agriculture, while that those of the southern parts and the Mesopotamian Plain are questionable or unsuitable.